An Introduction to New York

Visitors can get their bearings in New York by researching the options for City Tour perhaps a way to get a glimpse of the main attractions before deciding what the priorities are for the rest of the holiday.

If it is just a weekend visit, this is certainly the quickest way to see the landmarks made so famous on film and television.

The best tours are those using double decker buses where tourists can buy tickets with a certain validity and hop on and off at will; it is not possible to hop on and off in the same way with another means of transport that New York uses to introduce itself, the helicopter!

There is so much to see in New York that only the individual will know how he or she wishes to spend their time.  The landmarks are perhaps the most straightforward of the

However when it comes to the cultural aspects of a visit, it is impossible to list the number and variety of museums that await the visitor to New York so that part of the trip may be best done individually. The Museum of Natural History is astonishing whether the section on prehistoric life, on current birds and mammals or the priceless collection of gemstones, one emerald a particular stunner.

New York is a city of art and once again whether it is the Guggenheim, the Museum of Modern Art, or any other, it’s definitely a case of being spoilt for choice. 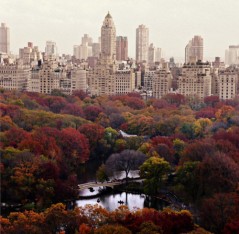 For those of a nervous disposition there are two other tours to consider; a 15 minute helicopter ride above the City, going over the Bridges on the East River and viewing the famous landmarks of Manhattan is one of them. The helicopter ride of course can give its passengers a whole new perspective of the Empire State Building or the Statue of Liberty; the pilot takes the helicopter so close it is nearly possible to touch these landmarks.

The other is a virtual reality show within the Empire State building here the visitors sits in a theatre and is absorbed into a virtual reality flight over the City and under the Rivers of New York in a real flight of fancy.

Sometimes the basis for making a decision about a guided tour depends on the constraint of time. Tours can be a single day seeing the main sights or taken over a few days where passengers can jump on and off the buses at places which they want to see in more detail. 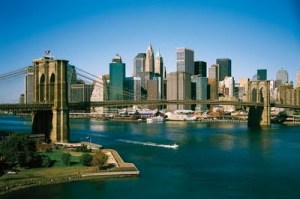 Companies also run tours at night time either to experience the attractions at night or perhaps link a tour with a visit to a theatre, a restaurant, or enjoy the general night life that New York has to offer. There are tours for every taste and flexible combinations to help tourists experience the atmosphere of New York at first hand.

This article was written by Steve, a travel blogger for Nycvacationrentalsonline.com, providers of NYC holiday apartments and New York vacation rental apartments.

Where are the best places to see in the New Year?

For 24 hours every December 31st there is an international party as everyone around the globe will ring in the new and see out the old. Worldwide you will find scenes of joy as happy throngs of cheerful people, sing, dance and toast in the New Year, whilst all around fireworks and live music fill the air. With such a great variety of destinations to choose from, where are the most popular and spectacular places to mix with the crowds and see in the New Year in style?

Trafalgar Square and The London Eye 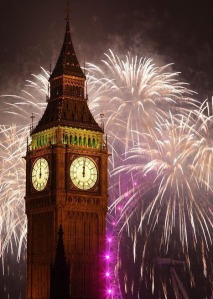 For many years the image of hordes of people enjoying the lead up to the New Year packed into Trafalgar Square was a traditional sight. Everyone excitedly waiting for the booming tones of Big Ben to announce the changing of the year but in more recent times there has been a change in the air. A marvellous firework spectacular is now laid on along the banks of the Thames, with the focus on the London Eye. Since 2005 the display has lit up the capital’s night sky and entertained the crowds as with linked arms they sing along to “Auld Lang Syne” 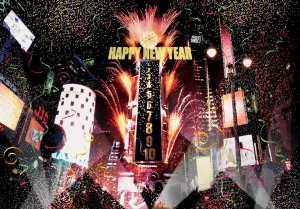 New York with all its usual razzamatazz and glitz definitely delivers on New Years Eve. Times Square forms the centre where an estimated million people gather to watch the famous New Year ball drop down the flagpole of One Times Square. This is a sight, to which Americans have greeted in the New Year since 1906 and has become a carefully orchestrated operation. The crowd stretches all the way up to Central Park and the streets are decorated with lights and seasonal displays. As soon as the ball falls the whole city erupts and a magnificent firework show starts on top of One Times Square. 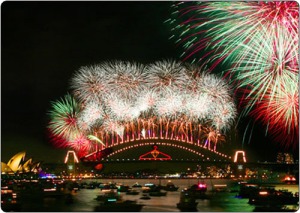 Australia is one of the first major centres to see in the New Year and their exuberant celebrations are a familiar scene on television broadcasts. Sydney also benefits from being in the southern hemisphere so they are celebrating in the middle of summer. There are midnight swims in the sea and beach parties, the most famous being on Bondi Beach. There are concerts and live music throughout the city and always a breathtaking firework display on the Sydney Harbour Bridge. The vast natural caldron of the harbour provides the prefect setting for the display and annually over 300,000 tourists visit solely for the festivities. 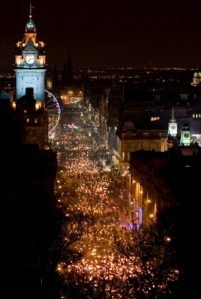 While many New Years celebrations are a modern phenomenon the Hogmanay Festival in Scotland is centuries old. The most thrilling Hogmanay to be had is in Edinburgh and here they cordon off the city centre for the revelries. There is a torch lit procession on the 30th December, which goes from Parliament Square up to Carlton Hill creating a river of fire along the Royal Mile. On the 31st the air is filled with music, traditional dancing and entertainment, culminating in the firing of the cannon at Edinburgh Castle and a massive fireworks show.

If you wish to try a novel approach to seeing in the New Year, you could always visit the first or last places to celebrate. The first place on the planet to see the arrival of next year is with the 5,000 inhabitants on Christmas Island, a natural wonderland populated with rare and exotic creatures. It is famous for its unique red crab migration, turtles and colourful birds and provides a peaceful start to the year.  Should you wish to be one of the last people to see the dawning of the New Year you should head for Western Samoa, it is literally the last place on earth you can celebrate and renowned for its friendly party atmosphere.

If you wish to find out more about our Travel Content or are interested in having articles written please email:- travellingcontent@gmail.com